Piedmont is a region of north-western Italy, bordering Switzerland and France. As the name suggests, Piedmont is the land of the mountains: it is surrounded on three sides by the Alpine chain, which right here includes the highest peaks and the largest glaciers in Italy.

Piedmont with its elegant capital Turin is the homeland of Slow Food and a producer of excellent wines, a region with a lush and attractive countryside for lovers of nice walks and bike rides. 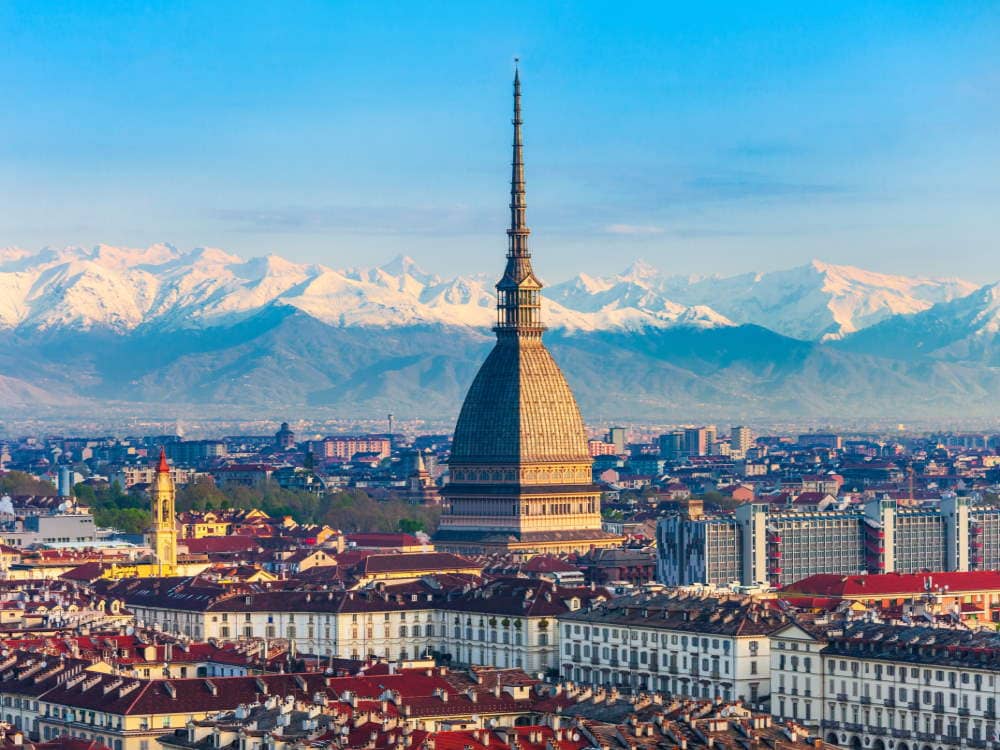 The first populations that inhabited the region in prehistoric times were the Ligurians and the Celts, also called Gauls, who came from beyond the Alps; these were followed by the Salassi, settled mainly in Valle d’Aosta, and the Taurini, who occupied the area at the foot of the mountains. The Romans had to fight hard against the Piedmontese populations, but after the second century BC they succeeded in gaining the upper hand and extended their dominion over the whole region, which was called Gallia Cisalpina, which means Gallia “which is located on this side of the Alps”.  The Romans gave a new structure to the territory, building cities, enlarging existing ones, and carrying out various public works, including numerous roads. With the decline of the Western Roman Empire, which occurred in 476 AD, the violence of the barbarian populations from Central Europe spread all over: the Vandals, the Eruli led by Odoacre, the Goths with Theodoric and the Burgundians of King Guidobaldo devastated a great deal part of the territories sowing death and despair. After a long period, the Lombards arrived who maintained control of the region for about a century. The Lombard dominion ended with the arrival of Charlemagne, king of the Franks, who also imposed in Piedmont the feudal system typical of the Holy Roman Empire, the kingdom on which it dominated. During this period many beautiful castles were built to accommodate the vassals. With the arrival of the German emperor Federico Barbarossa, the Piedmont and Lombardy municipalities joined the Lombard League and managed to defeat the emperor. After some time, the old feudal dynasties regained power. Among all, the strongest was that of the Savoys, who gradually imposed their dominion. The power of the Savoy family continued to grow over the centuries, until in 1713 they extended their dominion over the whole region. In this period, the cultivation of rice, imported from the East, was introduced in Piedmont and the use of water as a source of energy became widespread. Piedmont, after a short period of French domination during the Napoleonic empire, returned to the Savoy and became the state that guided Italy towards unity, which occurred in 1860.

The name of the region refers to its geographical conformation: Piedmont means in fact “at the foot of the mountain” and indicates the physical area included in a large semicircle formed by the Alps which delimit the plain and the hills on three sides. The mountains originally designed the edges of a sort of large gulf, or basin, which about thirty million years ago was completely flooded by an ancient sea called Tetide. The clear passage between the plain and the Alps is evident only in Piedmont, while in the other Italian regions there is an intermediate chain of heights called Prealps. Here probably their lifting from the seabed, which occurred about fifteen million years ago, was counterbalanced by a sinking of the central area of the same sea.

Piedmont has a typical temperate continental climate; in the Alps, it becomes progressively cold-temperate and cold climbing at high altitude. In areas located at low altitude, the winters are relatively cold but not very rainy and often sunny, with the possibility of snowfall, sometimes abundant, especially in the Cuneo area, in areas along the Po river, on hilly areas such as the Langhe and Monferrato and in the foothills. Summers, on the other hand, are hot and muggy with local thunderstorms, especially in the areas located north of the Po, while south of the Po river, summer rainfalls are not frequent.

Piemonte’s cuisine is very traditional. Some Piemontese dishes come from ancient traditions, such as the frying dish “Fritto misto alle Piemontese”, which was previously only prepared during the period when the cattle were slaughtered at home. At the end of the day, all meat scraps were fried. It is the region of the Piedmont cattle breed that grazes in the mountain pastures and a typical local recipe is the Brasato in Barolo, a great beef dish from the land of Cavour. Piedmontese cuisine is very varied and other specialties include bagna cauda, ​​a dipping sauce for fresh vegetables made from garlic, anchovies, and olive oil, and veal with a tuna sauce. Piedmont is also the land of the white truffle (Alba), the Blue di Morozzo and robiola cheeses, the Lumache from Cherasco (snails), and the desserts such as Bonet made from milk, cocoa, eggs, rum, and amaretti-biscuits or the special cocktail Bicerin (coffee, chocolate, milk cream, and syrup). Piemonte has a lot of hazelnut cultivation and this is the place where the famous Nutella comes from. The region certainly offers a very varied choice of food and culinary specialties and it is, therefore, worth making a round tour to taste it all.

Piemonte, together with Tuscany, has the most important quality wine production in Italy. There are no fewer than 18 Docg and 41 Doc wines, including the Barolo, Barbera, Nebbiolo and Barbaresco

Piedmont, famous for its Alps and very mountainous territory, is certainly a suitable destination for adventurous excursions, both on foot and by bicycle. In Piedmont there is really plenty of choice between art and architecture, history and culture, legend and tradition, natural beauty. Once in Turin, the first capital of Italy, a dip in history and culture awaits you: among its streets, squares, Royal Residences and elegant historic cafes you will breathe its royal past, home of the Savoy House; you will get lost in the many museums, from the new Egyptian Museum to the National Cinema Museum to the National Automobile Museum. A visit to the Reggia di Venaria, outside Turin, is also a must. Piedmont boasts a landscape made unique by the great variety of scenarios that range from mountains to lakes, from hills to plains, from cities of art to historic villages, from Royal Residences to the Sacred Mountains that have obtained Unesco recognition and since 2014 also the wine landscapes of Langhe, Roero and Monferrato: it is in fact one of the most spectacular scenarios that the Piedmontese territory offers, where the beauty of nature is combined with the skilful work of man over the centuries, giving life to excellent products such as the fine Barolo, Nebbiolo and Barbaresco wines. Also, the precious Piedmontese breed of cattle is also renowned in the area and of course, we cannot forget the precious white Alba truffle, appreciated all over the world.

The lakes are a flagship, always a strong attraction for foreign tourists: Lake Maggiore stands out, with its majestic villas and breathtaking gardens located within the evocative Borromean islands, and Lake Orta with the splendid island of San Giulio. Furthermore, the Gran Paradiso National Park and the beautiful Val di Susa are certainly worth a visit. 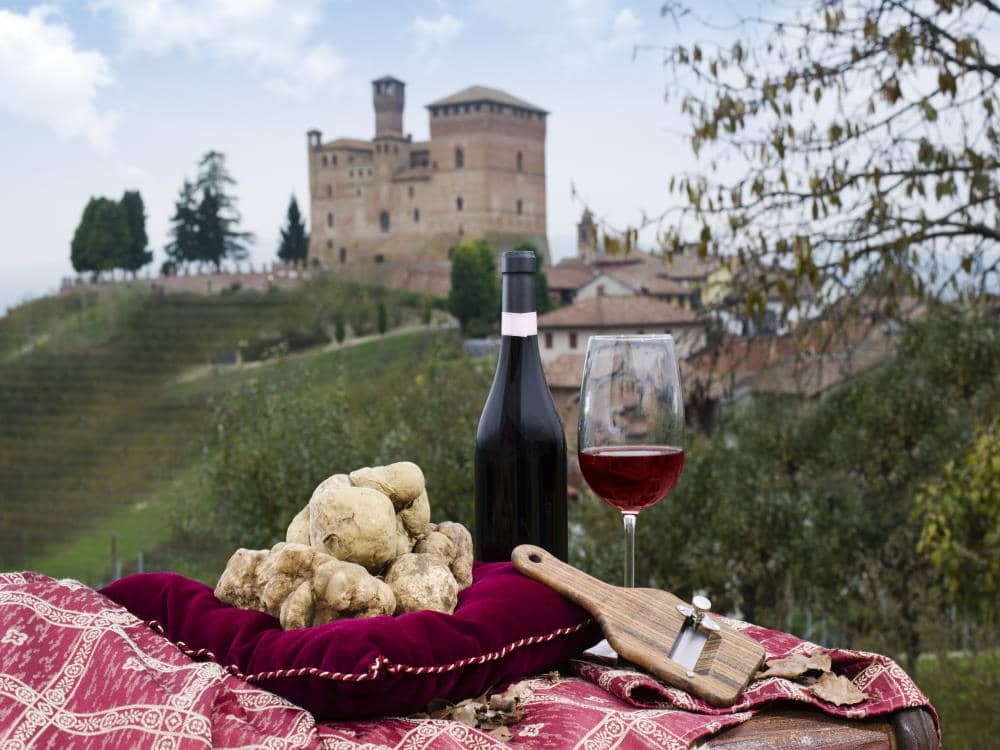 Our Tours in Piedmont

This walking tour starts in Turin, a town with majestic squares and palaces, and follows the route with evocative and unique views La Gran Traversata della Collina.

The Castles & Parks of Piedmont tour is a real paradise for cycle lovers because it offers delicious food and wines, beautiful nature, and art.

Walking in the Langhe

Piedmont is a real paradise for cyclists and food lovers. It offers prestigious wines, truffles, chocolate, and a stunning hilly landscape.