The Marche with its fascinating capital Ancona, is a region of central Italy, easily accessible from both north and south. The name Marche derives from the Gothic word Marka, or “border sign”. The Marche is a region that deserves a visit: a varied countryside with rocky mountains, green hills and the beaches of the Adriatic sea. It is a region with small medieval towns, like Urbino, castles, and fortifications like the Castle of Gradara and deep-rooted traditions flowering in an excellent cuisine. 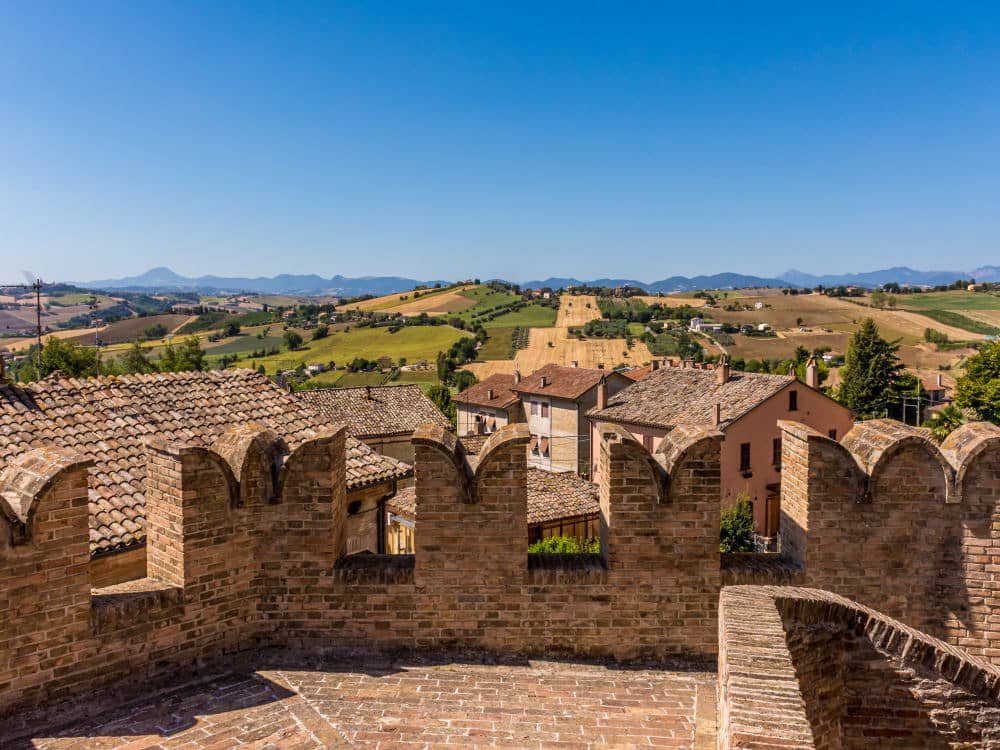 Inhabited since the Paleolithic period, the Marche region has never had unitary historical events: before the control of the Romans (III century BC) it was inhabited mainly by the Piceni, while the Senoni Gauls were confined to the north, the Greeks to Ancona and the Umbrians to the south -west.

In the Middle Ages the region was divided between the Byzantines in the north and the Lombards in the south, until the Franks donated it to the popes. Under the dominion of the Church, free communes were born and in the Renaissance important Lordships were formed (Malatesta, Montefeltro-Della Rovere, Chiavelli, Varano). The court of Urbino became one of the most important art centres, the fortresses and castles spread in the region and built by the best military architects remind us of the contentiousness of the Municipalities and Renaissance Lordships. The Sforza and Cesare Borgia tried without success to reunite the region militarily and in 1631 administrative centralization under the Church was completed. After the French Revolution, the Marches returned under the Papal States; then they were occupied by Piedmontese troops in 1860 and entered the Kingdom of Italy.

The natural environment of the Marche has been largely transformed into agricultural crops and pastures, but there are many protected areas such as the Monte Conero Natural Park, the Sibillini Mountains Park, the Monti della Laga Park and the Frasassi Caves. Beech woods characterize mountainous areas, while abundant Mediterranean bush is found along the coastal areas.

As for the climate of this region, a distinction must be made between coastal areas and inland.

The Adriatic Sea greatly influences the climate. Along the coast and in the immediately adjacent areas, the climate is Mediterranean and tends to change to sub-Mediterranean as you move inland, up to the predominantly mountainous areas where there are strong changes in temperature. Generally in the whole region there is a significant difference between summer and winter; the winter period is cold and rainy due to north winds such as the mistral and the bora; in summer, however, hot and humid winds like the sirocco blow, but even near the sea the temperatures never rise above 30 °.

The Marche region offers excellent food and wine variety. If you come to this region, it is not possible not to taste some of the typical specialties of the different areas, naturally accompanied by excellent local wines. How not to be tempted by the famous Ascolana Olives? In fact, if it is true that it is now a specialty that can be eaten in any part of Italy, it is only in Ascoli that you can try the original recipe. Among the typical products, there are the macaroni from Campofilone, near Fermo, which have obtained the PGI denomination, to be tried absolutely with a meat sauce.  The Vincigrassi, on the other hand, might seem like lasagna, but they are the typical pasta of this region, a delicious and tasty variant of the Bolognese. The passatelli, on the other hand, are typical of the Pesaro area. Then we have the ciauscolo, a soft salami that is found in Visso and throughout the Macerata area. Among the cured meats, there are the loin, the dry sausage and the Carpegna ham. Porchetta (a kind of roasted pork) and rabbit in porchetta are among the most appreciated second courses, but in Pesaro you can also taste Pasticciata, a braised meat served with potatoes and herbs.

Among the wines: the red Rosso Conero, the Verdicchio, the Rosso Piceno and the famous Lacrima di Morro d’Alba.

The Marches are perfect for four types of tourist itineraries: naturalistic, religious, artistic – cultural and relaxing. In the first case, you can decide to visit the natural parks: the Frasassi Caves, the Sibillini Mountains, the Conero and the Gola del Furlo with an incredible variety of flora, fauna and morphology of the territory that will surprise even the most demanding tourist. In these places, you can have total tranquillity, be in contact with the wildest nature and the most spectacular panoramas. On the other hand, if you prefer religious tourism, the main destination is Loreto, where there is the Sanctuary which houses the Holy House of the Virgin Mary. It is one of the most important places of the Catholic religion, visited by thousands of faithful every year. Among the art cities, Urbino is an important destination, as is Recanati, linked to the famous poet Giacomo Leopardi. Other lesser-known, but equally interesting destinations such as Ascoli Piceno, Macerata, Gradara, Cagli, Camerino, and Fabriano, the city of paper, should not be underestimated. Instead, there are those who look for relaxation and tranquillity: the Marche coast can perfectly meet your needs. The best known places are Gabicce, Pesaro, Numana, Sirolo, Porto Recanati, Porto San Giorgio, Fano, Civitanova Marche and Senigallia.

Our Tours in the Marche

Cycling along the Adriatic coast

Cycling from San Benedetto del Tronto in the Marche to the Abruzzo, a tour full of nature reserves, old characteristic villages, many beaches, and deep-rooted traditions such as fishing from the Trabocco.