Slovenia is a country full of wonderful scenarios, constantly evolving and improving, which could invest heavily in its recovery since it became independent from the Yugoslav federation in 1991. The country offers landscapes of great beauty, ranging from the coastal towns of Italian style, a legacy of the Venetian dominations, up to the northern cities of Austro-Hungarian taste. Slovenia is suitable for any kind of tourist: it offers evocative seaside destinations, sunny ski slopes, cities of great cultural value and a natural heritage that boasts unique features in the world. 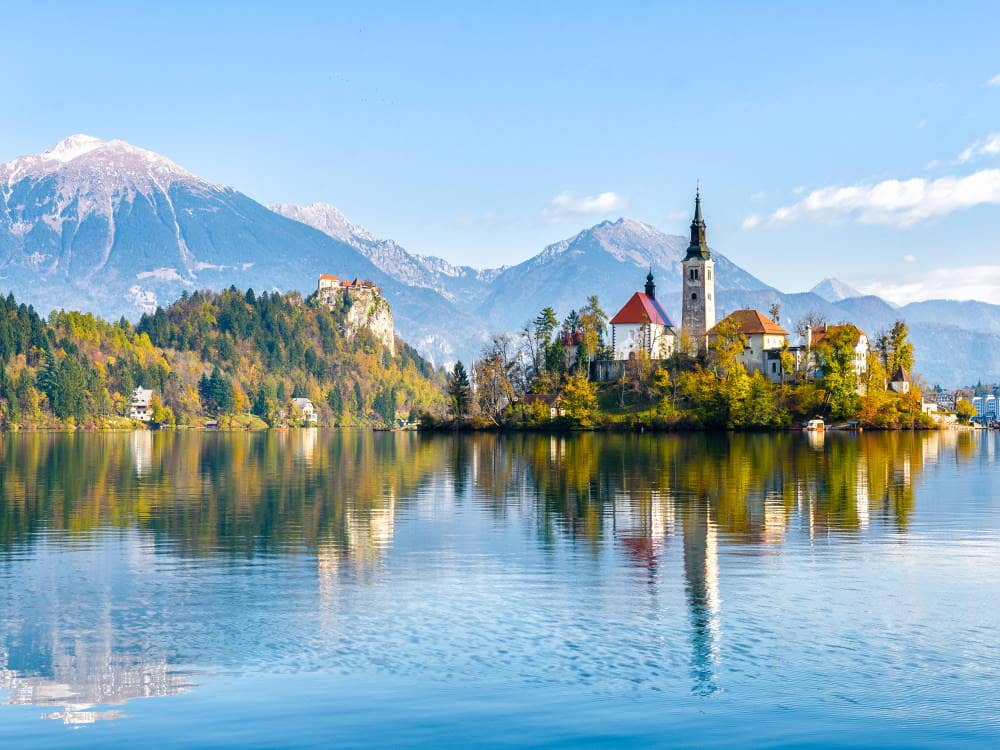 The region takes its name from the Slavic tribe of Slovenes, coming from Pannonia, who settled there in the 6th century. The Slovenes, in vain opposed by Bavarians and Lombards, occupied areas of Friuli up to the Piave and Austria along the Danube valley (VII-IX century). But the settlement in small groups in these alpine valleys, isolating them from the other Slavic peoples of the Balkans, deprived them of any possibility of remaining independent. In fact, they fell under the influence first of the Franks (8th century), from whom they were converted to Christianity, then they were dominated by Germanic peoples (10th century); starting from the fourteenth century, their lands were confiscated by the Habsburgs, while the Slovenian coast started to become part of the Republic of Venice, to which it remained linked until 1797. On one side, the long subjection to the Habsburg government prevented the birth of a sovereign state and an indigenous culture but, on the other side, it guaranteed the country economic prosperity, thanks to the reforms launched in the second half of the 18th century by Maria Teresa and her son Giuseppe II, who favoured agricultural activities and commercial relations (Trieste became the main port of the empire). The Slovenes remained loyal to Austria for a long time, without feeling any authentic independence aspiration before the Romantic era, although a timid awakening of national consciousness was favoured by the peasant revolts (between 1478 and 1573) against the nobility of Germanic origin, and above all from the brief experience of the Illyrian Provinces (1809-14) under Napoleon I. Following the victory of Wagram (1809), the French emperor deprived the Habsburg Empire of the outlet to the sea by establishing the six Provinces (with capital Ljubljana) and putting Slovenian intellectuals in contact with the ideals of the French Revolution. Returning to Austria in 1814, the Slovenian territory, during the First World War, was the scene of eleven Italian offensives on the Isonzo and an Austro-German one in Caporetto (1917), which forced the troops of General L. Cadorna to a disorderly retreat first on the Tagliamento and then on the Piave river. In 1920, a year before joining the Kingdom of Yugoslavia, Slovenia saw one third of its territory subtracted from the Treaty of Rapallo, which sanctioned the passage to Italy of Istria, the western Karst and the Julian Alps. The Second World War, however, was sealed by the cession of Istria to the Yugoslav Federation, which had just been formed (1946) under the leadership of J. Tito. The Free Territory of Trieste was excluded from this provision, whose partition between Italy and Yugoslavia was ratified by the Treaty of Osimo (1975), as a seal of a relaxation of tensions between the two countries. At the end of 1991, Slovenia signed a definitive Constitution, sanctioning its independence from the Yugoslav Federation. In June 1996, Slovenia became part of the European Union.

Slovenia borders Italy to the west, Austria to the north, Hungary to the east and Croatia to the south. It is bathed in the south-west (Gulf of Trieste) by the Adriatic Sea, and the capital city is Ljubljana. It is one of the least extensive of the former republics of Ex-Yugoslavia. Most of the Slovenian territory is located more than 200 m above sea level. It can be divided into three areas: the karst plateau to the west, between the border with Italy and Ljubljana; the alpine and pre-alpine area which occupies most of the country and a flat part east of the Hungarian border. The karst plateau is characterized by limestone rocks subject to the characteristic phenomenon called karst which involves the formation of underground cavities where sometimes even watercourses flow. The Alpine area is composed, from west to east, of the Julian Alps, on which Mount Tricorno, the highest peak in the country, with its 2864 meters is located. This massif, in addition to being a national monument and emblem of Slovenia, gives its name to the national park with the same name. The coast, about 50 km long, begins on the Italian border to reach the Croatian one and covers a small portion of the Istrian peninsula. The country’s four main rivers are the Soča, Sava and Drava, tributaries of the Danube, and the Culpa River. The largest lake is that of Cerknica which has the characteristic of filling and emptying periodically due to the presence of karst rivers and sinkholes below in the ground.

The Slovenian climate can be divided into three main areas: the western lowland area that reaches Nova Gorica in the north of Istria, characterized by a mild Mediterranean climate, inland areas such as the hills, the valley and the eastern plain with a continental climate and the high mountains where the climate is alpine. In Slovenia, rainfall is abundant in the west. On the Eastern hills and plains, rainfall is less abundant.

The country’s food and wine have been greatly influenced by all the populations that have dominated the region. Slovenia is proud of the genuineness of its food; in the many agriturismi (gostilna) of the country it is possible to taste second courses of game and other dishes similar to those of the Austro-Hungarian and Central European tradition. On the coast, fish specialties are a must, especially seafood. In town, soups and broths (with mushrooms, barley, sauerkraut), stuffed pies, meat (pork, veal and lamb), game, stews, goulash, mushrooms predominate; many dishes are based on cabbage, beans and potatoes. Typical are sausages such as salami, klobasa, and krvavica, black pudding, rice and spices, often combined with sauerkraut with lard, spices and smoked bacon. Struklji, cheese fritters, known in over 70 variations, are widespread throughout the country, they can be made of pasta filled with meat, ricotta or vegetables and seasoned in various ways, both savoury and sweet. As for desserts, we find the Gibanica, a richly stuffed cake with ricotta and walnuts. Also famous are the Zavitek (strudel), the Krof (Krapfen), and the cinnamon scented honey pastes. Among white wines a special mention goes to Malvasia, coming from the karst area. Among the reds, on the other hand, we point out a wine, equally intense and full-bodied, called Terrano.

Slovenia is a land of breathtaking landscapes and natural beauty. Iconic lakes, beautiful forests and characteristic hamlets are just some of the things in Slovenia that will delight you!

Among the things to see there is undoubtedly the capital of Slovenia, Ljubljana.

It is an increasingly lively city that can well rival the European metropolises. Walking through the city you will see the Dragon Bridge, the Main Market, the Plečnik house, the museum house of the famous Ljubljana architect, the National Gallery which houses the largest collection of works of art from the early Middle Ages to the 20th century, the Ljubljana castle, the marvellous cathedral of St. Nicholas in Baroque style and the evocative Civic square.

Among the main attractions of Slovenia, a special mention goes to Predjama Castle. For 800 years, Predjama Castle has been nestled in a 123-meter high rock face, one of the most fascinating castles in the world that seems to have come out of a Gothic fairy tale. The castle is a medieval jewel where the creativity of nature is incredibly intertwined with the work of man. It is a unique castle, chosen several times as a film set. The Postojna caves are hidden beneath the castle, connected by underground tunnels and secret hidden places. To visit the two attractions, visitors have access to a shuttle bus that goes back and forth between the caves and the castle.

Impossible not to mention the paradise of Bled with the lake, the island, and the castle. Lake Bled looks like fairy-tale lakes. Located in the north, near the Triglav National Park, it is an alpine lake, small but very scenic. Lake Bled is one of the most evocative places in Slovenia, to be explored with walks through paths and shelters in the green or with a ride on the carriages of the Fijakerji, the typical Bled coachmen. The charming village of Bled hides near the shores of the lake. At the centre of the lake stands the only Slovenian island, for centuries a worldly resort that enchants with the beauty of its nature, ancient stories, and healing powers. Among the many legends on the island: it is said that if you ring and listen to the church bell your wishes will come true. Furthermore, Bled Castle, the oldest castle in Slovenia, is reflected in its crystal-clear waters. This magnificent 12th century castle enchants with its picturesque architecture and the beauty of its interiors including frescoes and works of art.

Then you should visit Bled, the village on the lake of the same name, near the border with Austria.

Finally, a journey to Slovenia cannot miss a dip in its underground world. You will find impressive caves where a unique species lives, the proteus or human fish, commonly called baby dragon. So let’s talk a little more about the most visited caves in Slovenia, the Postojna caves. The Postojna caves have a nursery that houses 150 animal species, including the olm, the only European vertebrate that lives in the underground world for up to one hundred years and can survive without food for several years. The first baby dragon was born in 2016 and it was an event followed by biologists from all over the world. Then there are the Caves of San Canziano, of Kostanjevica, of Vilenica, and of Križna jama, real underground worlds.

In the end, Slovenia has only 42 kilometers of coastline between Italy and Croatia, but offers beautiful beaches suitable for everyone and often underestimated. The central beach of Portorož is the largest and most fashionable, full of clubs and restaurants. In Koper you can swim using the facilities of the central establishment or in Giusterna. Close to the Italian border there is Ankaran with natural bathing sites located at the Adria campsite and in Punta Grossa.

Slovenia is a real green destination, perfect for an ecological journey on foot or by bicycle. 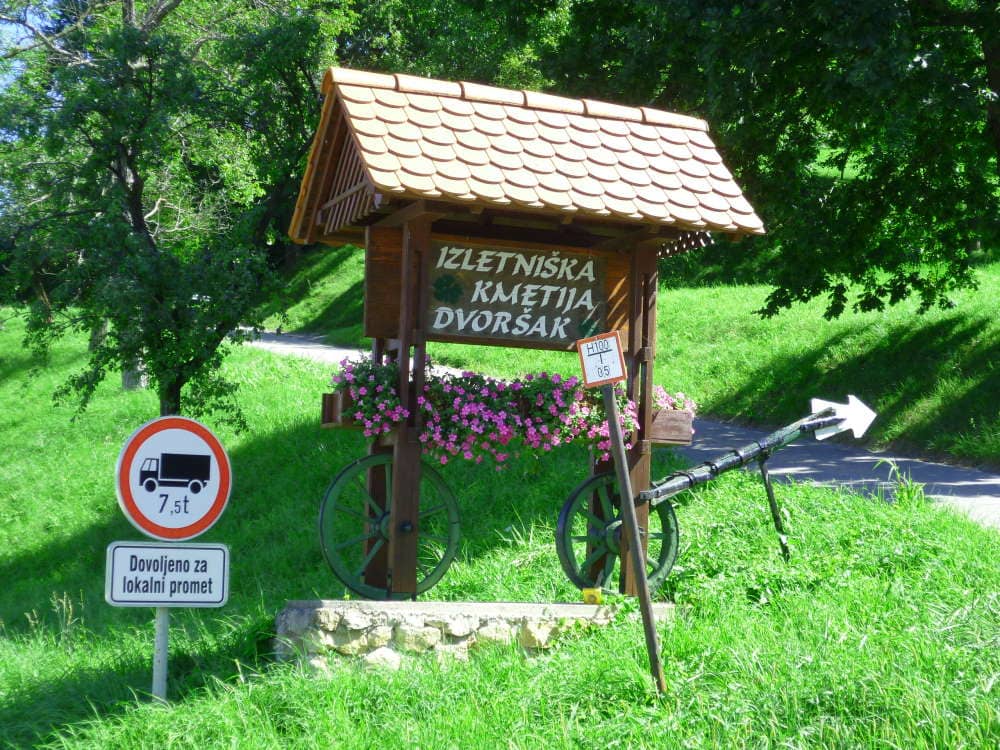 Our Tours in Slovenia

Walking in the Julian Alps along its mountain ridges gives gorgeous views on unimaginable sceneries and unexpected emotions.

This cycle tour in Slovenia starts in Ljubljana, a beautiful and lively town. You pedal along a medieval trading route passing culturally interesting places like the Postojna Caves.