Italy is a European country belonging to the Mediterranean area. The country is an important holiday destination, both for Italians and for foreigners, because it is an extremely fascinating and varied country in terms of climate, nature, culture, traditions, gastronomy, and wines and there are certainly numerous holidays needed to discover the country in all its different facets.

Together with France and Germany, it is the cultural and economic driving force of Europe and is often considered, like Greece, the cradle of contemporary western civilization, thanks to the historical role played by the Roman Empire.

Italy has a total area of 301,340 square km, while the population is around 60 million inhabitants.

The country features its famous boot shape: it is a peninsula, connected to central-northern Europe through the chain of the Alps, which extends along the north-west / south-east axis, gradually approaching the Balkans through the Apulian territory and the African continent through the islands of Sicily. The Italian territory is hilly for 41.6% on the national surface, mountainous for 35.2% and flat for the remaining 23.2%. Mountains are in almost all regions, but the highest are found in the northern regions.

There are numerous rivers (the most important are the Po, the Tiber and the Arno) and lakes (such as the lakes of Como, Garda, Maggiore, Trasimeno, Albano and Lesina, of various origins: glacial, volcanic, coastal or artificial). 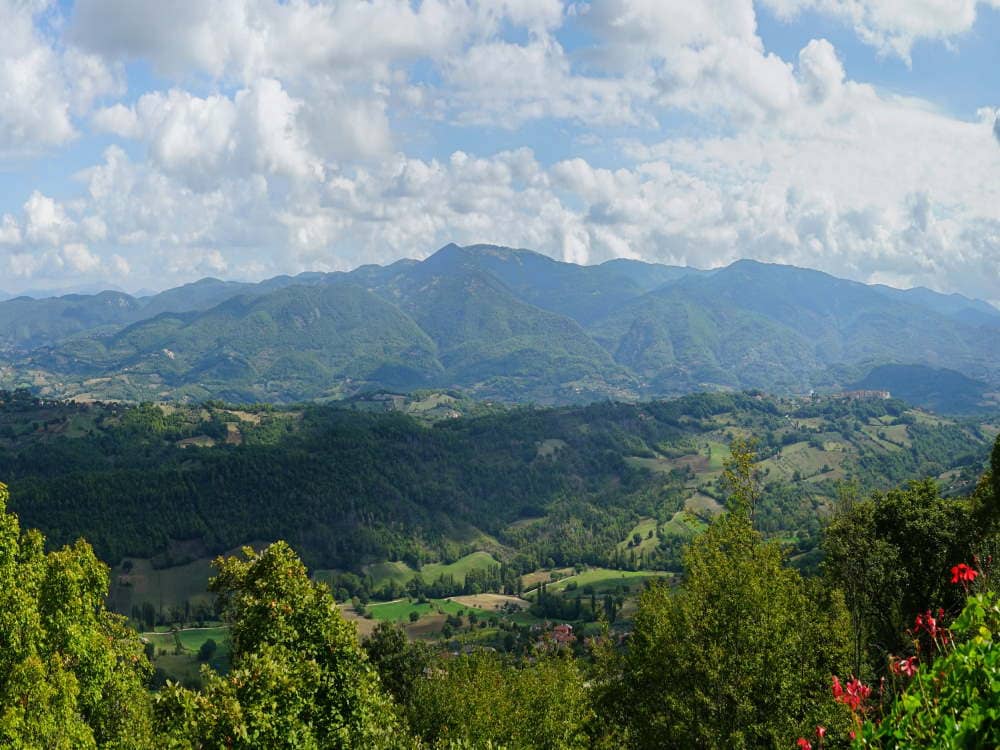 Climate and weather in Italy

Italy is very elongated with its 1300km and the climate in the North differs somewhat from the South. The Italian climate is generally defined as “Mediterranean”, characterized by mild winters and hot summers. However, a continental climate with cold winters and hot summers is more widespread in the interior and northern regions. The Italian climate can be divided into three large macro areas

As for the temperature in the main cities: in Rome the average temperature for the month of January is 3 – 13 ° C, that of August ranges from 22 to 28 ° C (with absolute peaks of – 7 ° C in January and 46 degrees in August). Milan goes from 3 ° C in January to 25 in July, with fairly consistent cloudiness throughout the year. Naples has a winter average of 8 ° C and a summer average of about 28 ° C.

The first urban settlements in Italy date back to the first millennium BC: first the Villanovan civilization, then the Etruscan civilization and only later the Roman one were coherent forms of territorial government and cultural development.

During the Roman Empire, Italy was at the centre of a vast territory, which expanded from Northern Europe to Mediterranean Africa, and the progressive development of cities with various monumental elements within them (Amphitheatre, Roman Forum etc.) defined Italian town planning in a very similar way to what we see today. The Roman use of connecting the new domains through consular roads has further benefited the connections along the peninsula, and the routes of the various roads (Appia, Flaminia, Aurelia, Salaria etc.) are based on those of Roman origin still today.

With the fall of the Roman Empire, the entire peninsula went through a period of instability and a progressive succession of rulers from the North: Franks, Visigoths, Ostrogoths, Lombards and more. It is only around the eighth century that the State of the Church establishes its temporal power over central-northern Italy, dominating the national scene, together with the various kingdoms (that of the Two Sicilies, the Lombard-Emilian Duchies, the Grand Duchy of Tuscany and the Kingdom of Sardinia) until the Unification of Italy. The peninsula, which has always been divided, finds its definitive unity only at the end of the nineteenth century, thanks to the progressive expansion of the Kingdom of Sardinia which, controlled by the Royal House of Savoy, annexes all the territories of the peninsula, transferring the capital city from Turin to Florence and finally to Rome, where papal power is replaced by civil power.

Italy is one of the protagonists in both world wars: it comes out victorious from the first and defeated by the second, with enormous human and material damage. On June 2 1946, the people took part in the referendum that transformed the country from monarchy to republic.

The second post-war period represented a real revival of Italy, with an infrastructural, civil, political and cultural modernization that affected various sectors, albeit between differences and profound political instabilities.

The calendar of holidays in Italy is strongly influenced by the Catholic tradition: among the main national holidays we find Christmas, Easter (and Easter Monday), All Saints Day (1st November) and the Assumption of Mary, commonly called August 15th (15 August). There are also the Liberation Day (April 25), the Labor Day (May 1) and the Republic Day (June 2).

In all municipalities there is also the patronal feast, or the religious anniversary of the patron saint of the city, which is a public holiday, with abstention from work and schools.

Italy hosts countless cultural and sporting events. Among the most famous are the Venice Film Festival, the Italian Song Festival in Sanremo and the Rome Film Festival, in addition to the fashion weeks held in Milan (one of the “four capitals” of world fashion together with Paris, New York and London) and Florence.

Among the events of national cultural importance that are held in other cities we can mention the Palio di Siena, the Corsa dei Ceri in Gubbio, the Giostra della Quintana in Foligno and numerous other examples of how culture, religion and traditions mix in events with international reference.

The Mediterranean diet is the heart of Italian cuisine. Italian cuisine is among the highest gastronomic expressions in the world, thanks to the huge number of recipes and culinary traditions deriving from national and international influences accumulated over the centuries.
If Italian cuisine features excellent quality dishes, ingredients and raw materials, it is the individual culinary traditions of cities and regions that define a true universe of “Italian flavours”, which vary significantly from one place to another one.
Emilia Romagna is considered the cradle of the cuisine of the Bel Paese, also called the belly of Italy. It is a region where famous dishes such as lasagna, ragù, cappellacci, tortellini, Parmigiano Reggiano, Prosciutto di Parma, Mortadella and Modena IGP balsamic vinegar come from.
Of particular interest is the Neapolitan cuisine (with pizza, desserts, pasta and fish dishes) and Roman and Lazio cuisine (bucatini all’Amatriciana, vaccinara tail, tripe, pajata, supplì etc.), but the typical characteristics of Tuscany, Umbria, Liguria, Puglia, Sicily are also of particular value, and more generally each region has its real heritage to put on the table.
Italy preserves the hundreds of typical features that make it famous all over the world: let’s think of the cultivation of wines and the production of extra virgin olive oil in central Italy, the lemons of the Amalfi Coast and the cherries of Vignola. The initials IGP / IGT (Protected / Typical Geographical Indication) and DOC / DOCG / DOP (Controlled and Guaranteed / Protected Designation of Origin) protect many productions.

We can certainly say that whatever region you visit in Italy you can always enjoy delicious dishes and excellent wines. 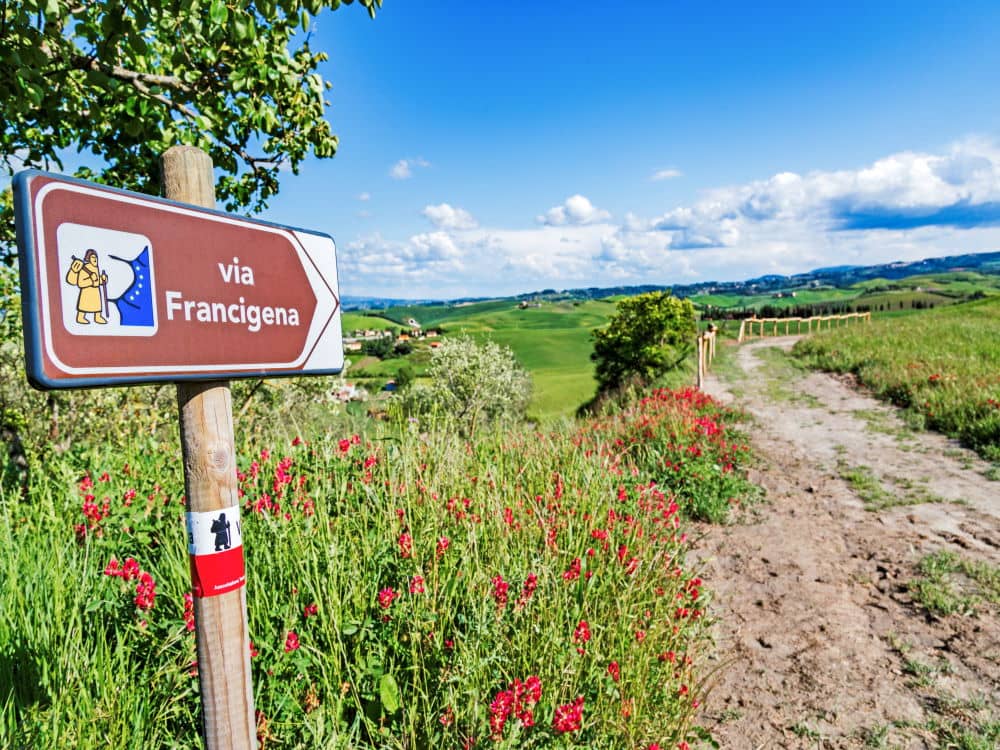 Select a Region in Italy

and view our tours

Some of our tours in Italy

A walking tour perfect for those who don’t want to change hotels every day. It offers the right combination of art, nature & hospitality of the towns Assisi and Spoleto.

Genova and the Cinque Terre

From Genoa (Genova) this suggestive cycle tour takes you through the Cinque Terre, a wonderful stretch of coast protected by Unesco