Sicily is the largest region in Italy and the biggest island in the Mediterranean; it is divided by the rest of the Italian peninsula by the Strait of Messina and is washed by the Ionian Sea, to the south-west it is divided from Africa by the Sicilian Channel.

Sicily is a sunny island full of art treasures, varied nature, with an ancient history and excellent food & wine. Because of its mild climate also in spring, autumn and winter it is an excellent destination for cycling and walking holidays. 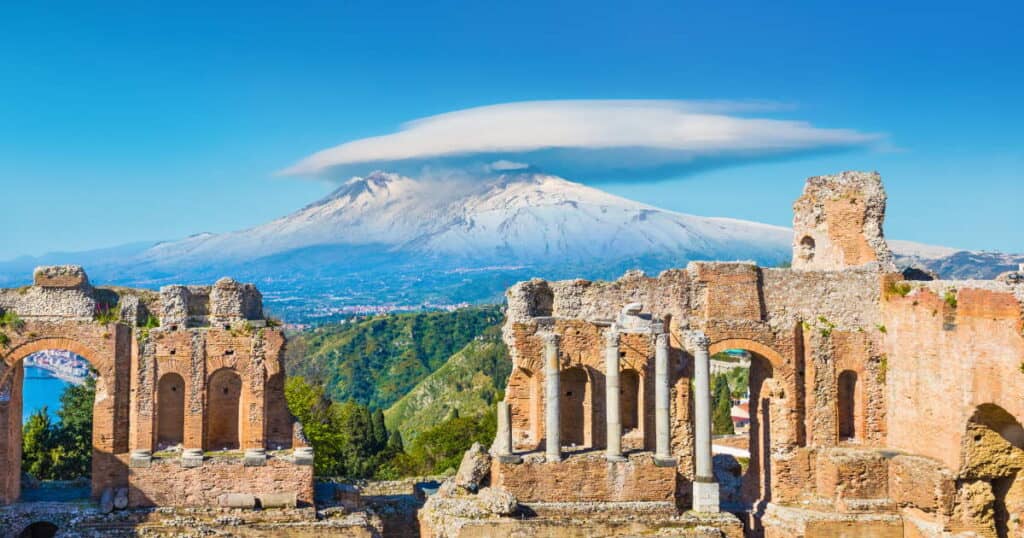 Sicily has always been a privileged destination for its strategic position, since the Palaeolithic era.

After the Sicani from Iberia, the Elimi from Libya and the Sicilians from the continent, It was the first Greek colonists who reached the island and caused the Phoenicians to withdraw from western Sicily (from 735 BC.). In 265 BC the Romans arrived in Messina. Under their rule, Sicily was divided into provinces and became the barn of the empire. After the Gothic-Byzantine war of 552 AD, the island was incorporated into the Eastern Roman Empire as a peripheral province until the ninth century. The Arab invasion of Sicily began in 827: from Mazara del Vallo to Taormina. From here begins a flourishing period for the island which will lead Palermo to become the capital of the Emirate Kalibi. In the meantime, in the Val di Noto and Val Demone areas, there is still the Greek-Latin civilization. Since 1061 the Normans have conquered Sicily: Ruggero d’Altavilla is crowned king of Puglia, Calabria and Sicily. The Swabian family will find a heir in Federico II, son of Henry VI and Costanza d’Altavilla. Manfredi, successor to the throne, leaves the place to the winner Carlo d’Angiò. Sicily faces an economic crisis, while power passes into the hands of the barons until 1500. In 1415 Spanish rule made the island vice-kingdom, but a development compared to the past. It will be necessary to wait for the treaty of Utrecht of 1713 to put an end to the Spanish kingdom, succeeded by the one of the Savoy. Ferdinand IV of Bourbon, king of Naples reunited the two Sicilies and finally abolished feudal privileges in 1812. With the revolutions of 1848 the Bourbon government fell, defeated in 1860 in Calatafimi by Garibaldi. In 1894 the Sicilian Fasci were also defeated thanks to Crispi, head of the government. After these events, Sicilian migrations to America begin, due to the great economic crisis. Sicily became an Italian autonomous region in 1948.

Sicily is an endless surprise for the variety of changing landscapes that go from impervious cliffs, white beaches, such as the one of Baia dei Turchi, where the white shines, kissed by the rays of the sun and on the stones that seem smooth as sculptures, to black areas of lava origin. The territory is mainly hilly and mountainous, but the sea represents one of the main attractions of the island. The northern, high and rocky coasts open onto the Tyrrhenian Sea with frequent and wide inlets, such as the gulfs of Castellammare del Golfo, Palermo, Termini Imerese. To the east the Ionian coast is more varied; narrow pebble beaches near Taormina; jagged towards the south, with inlets and bays like Giardini Naxos; rugged basaltic cliffs near Catania. The southern coast – facing Africa – is generally sandy and uniform in the central part formed by the largest gulf in the region, the Gulf of Gela, while it is more varied in the Ragusa area and in the Agrigento and Trapani stretch.

The Mediterranean climate is characterized by hot summers and not too harsh winters, while the influence of African currents on particularly hot summers with low humidity is strong on the coasts. The Sicilian territory is very varied and also includes areas with imposing reliefs in its hinterland, such as Etna, Nebrodi or Madonie, with more rigid and snowy temperatures.

The flavours and the fascinating gastronomic variety show the signs of Magna Grecia, of the French noble cuisine and the exotic Arab aromas fused with the typical Mediterranean diet, creating one of the most fascinating and tasty Italian culinary traditions. Greeks brought the olive and the grape to the island. The Romans introduced broad beans, chickpeas, lentils and some pasta types. They transformed forests into arable areas suitable for grain cultivation. The Arabs brought almonds, anise, apricots, artichokes, cinnamon, oranges, pistachio, pomegranates, saffron, sesame seeds, spinach, cane sugar, watermelon and rice. They introduced many new flavors, which today are considered typically Sicilian, such as combining sweet with salt: raisins and pine nuts served with fish and vegetables. Undoubtedly, those who think of Sicily cannot help imagining its sweets, unique in the world: cassate, cannoli, authentic Sicilian granita with brioche, but also savoury specialties like the arancini or pasta alla Norma that conquers every palate.

Then of course we should also mention the fantastic Sicilian wines: Nero D’Avola, produced with the oldest indigenous grape varieties, Etna Rosso, produced on the rich and fertile slopes of the Etna volcano, the white wine Bianco D’Alcamo, from the fertile area between Alcamo and Trapani. Then there are the well-known dessert or aperitif wines: Marsala, the Passito di Pantelleria, a product of the grape variety Zibibbo, the Malvasia delle Lipari, an excellent sweet wine and the Passito di Noto: a sweet harmonious wine with a honey aftertaste.

Sicily has more than 1000 km of coastline that allows you to carry out activities such as surfing, windsurfing, snorkeling, kitesurfing, biking so that you can observe its fantastic backdrops and lava cliffs. Moving towards Etna and the surrounding valleys you can experience the thrill of tour in quaid, horseback riding, mountain bike itineraries, excursions and even a parachute jump and free fall with expert instructors.

Moving towards the hinterland, you discover Baroque cities and Norman castles, where there are also oriental-inspired architectures, but … looking back further in time you can also glimpse the ancient splendour of the Hellenic Empire: a must is a visit of the Temples (Agrigento) and of the amphitheaters (Taormina, Syracuse) which have accompanied the history of Sicily for over 2000 years. The colored mosaics of the Roman Villa del Casale in Piazza Armerina are also fantastic.

Theaters are still an important part of the life of the Sicilians with their plays, manifestations, and millenary works, entertaining the Sicilians and the numerous visitors mostly in spring and summer. Still strong and are the traditions and the re-enactments with traditional costumes, festivals; the soul of the island are the religious festivals that remind of the exceptional lives of martyrs and saints; among the most popular, the ones of Santa Rosalia in Palermo and Sant ‘Agata in Catania, spectacular for tourists.

Sicily also boasts the highest active volcano in the world, Etna, but also two other beautiful and evocative active volcanoes, Stromboli and Vulcano, in the Aeolian archipelago, which alone are worth a visit. 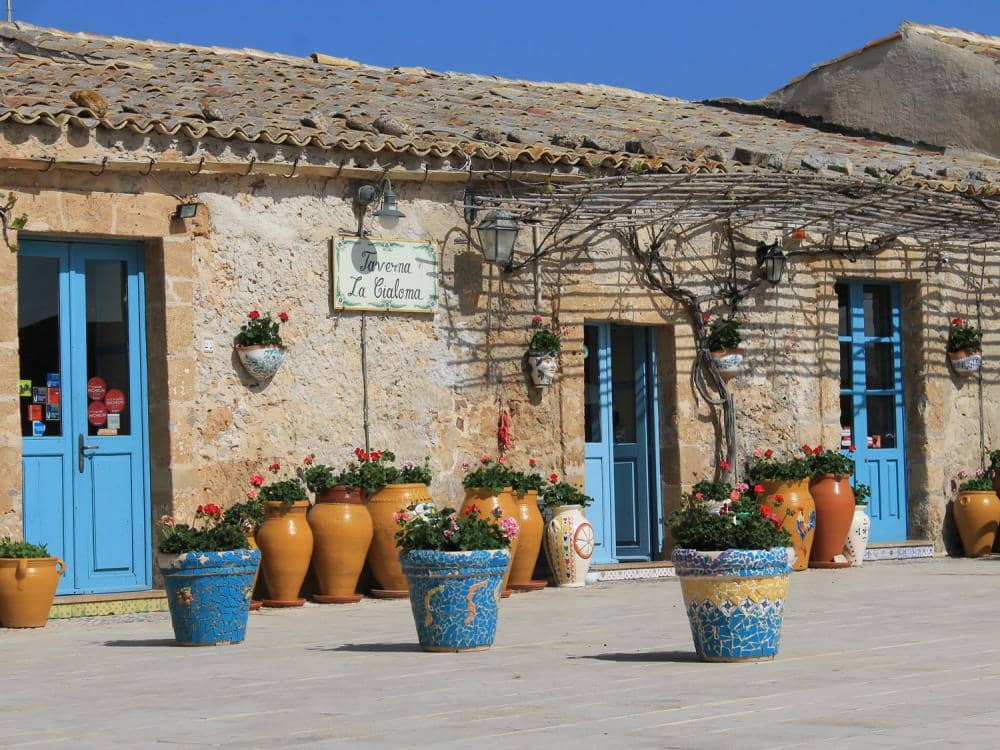 Our Tours in Sicily

An amazing cycle tour through Southeast of Sicily, an infinite island: mythical and real, sunny and magnificent, rich in nuances and particularities.

This road bike tour brings you to Sicily, an infinite island: mythical and very real, sunny and magnificent, rich in nuances and particularities.

This walking tour on Sicily is simply amazing, because you will discover four volcanoes: Etna, Vulcano, Lipari and Stromboli.

A bike tour in Sicily, the biggest and most enchanting island of the Mediterranean, has as a theme the Volcano Etna, art, sea, and beaches.

The heart of Sicily cycling tour

A cycling tour that skirts the fabulous Tyrrhenian coastline, but also it will allow you to discover the Sicilian inland with olive trees, vineyards, and historical sites.

Sicily has all the ingredients for a successful walking tour: blue sea, endless beaches, unexpected nature, delicious fish dishes, excellent wines, and a lot of culture.