Valle d’Aosta is the smallest region in Italy and is located in the north-west, on the border with France and Switzerland. Situated in the western Alps, it is known for the snow-capped peaks of the Matterhorn, Mont Blanc, Monte Rosa and Gran Paradiso. This mountainous region with beautiful nature parks is an excellent place, just like Trentino-South Tyrol, for avid hikers, adventurous mountain bikers, winter sports lovers and mountain enthusiasts.. 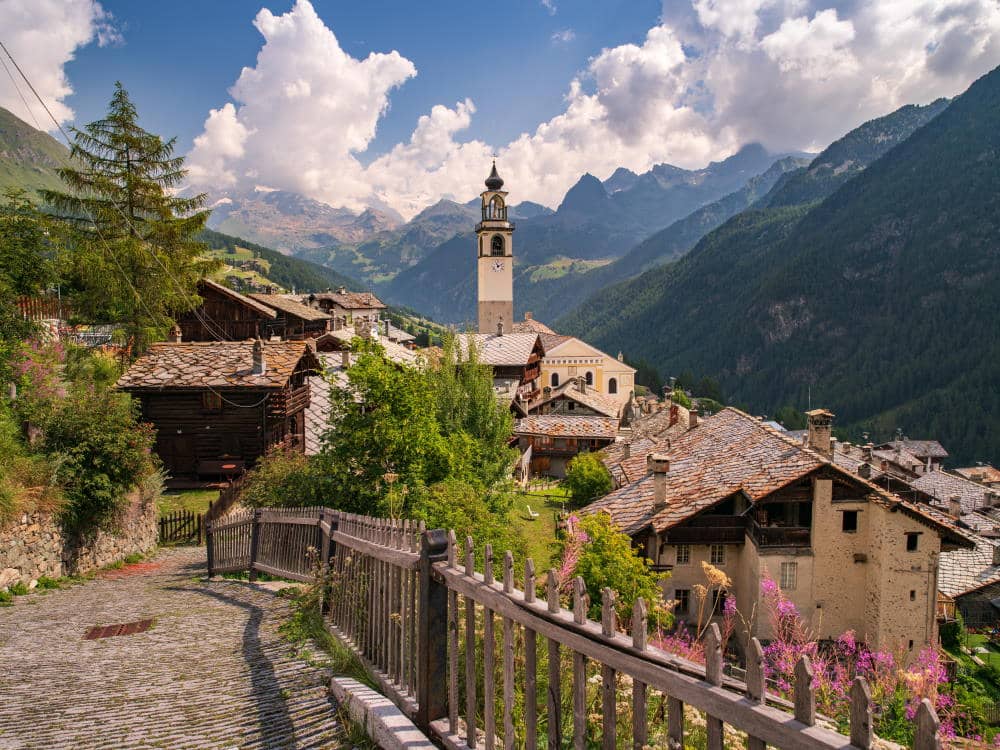 The Aosta Valley was occupied between the sec. IV and III a. C. by the Salassi, a population of Ligurian-Gallic origin. Starting from the 5th century, the valley was disputed by Burgundians, Goths and Byzantines until, with the affirmation of the power of the Merovingians, it passed to the Franks in 570. At the death of Charlemagne and following the division of the empire among his successors, the valley passed, in the 9th century, in the hands of the so-called “kings of Italy”, from Ludovico II to Carlo II Il Calvo, from Guido di Spoleto to Lamberto, then to Berengario I and Rodolfo di Borgogna. After numerous Saracen raids (10th century), it was submitted to the Savoy. Invested, like all of Europe, by the French Revolution, crossed by the French armies, which destroyed the ancient fortress of Bard, and annexed by Napoleon to France together with Piedmont, the Valle d’Aosta returned to the Savoy only in 1814 with the agreements made at the Congress of Vienna, and its history practically followed the history of the Savoy. In 1859, with the transfer of Savoy to France by Napoleon III, it became an Italian geographical and political border land. The valley regained a certain autonomy when, in 1926, Aosta was erected as a province within the Piedmont territory. During the Second World War, the partisan resistance led by Emilio Chanoux was very active, with the involvement of intellectuals such as Federico Chabod (later first president of the Valle d’Aosta Region), and despite the reprisals and raids, the valley was free even before the arrival of the allies. On November 7, 1945 it was proclaimed autonomous region and in 1948 it became a special statute region.

Enclosed among the highest peaks in the Alps, the Aosta Valley is a real mountainous area: a third of its surface is more than 2,600 meters above sea level. Monte Bianco, Monte Rosa, Matterhorn, Gran Paradiso are some of the legendary mountains that crown this valley. A territory full of challenges: majestic landscapes, high altitudes and the great differences in height make it a paradise for sports at the highest levels. From skiing to trekking, from mountaineering to water sports such as rafting and canyoning, up to mountain biking. But the Aosta Valley is also nature and contemplation: sunny valleys, green pastures and enchanted woods. The first Italian National Park was born in the Aosta Valley and almost one third of the regional territory is protected: a true alpine and biodiversity heritage.

Valle d’Aosta, although small, boasts different microclimates. Conditions, at high altitude, are typically alpine (short summers and long winters with temperatures that can reach -30ºC above 2,000 meters), while they become continental at the bottom of the valley (in the cold season the mercury column drops below 0ºC, in summer peaks of 30ºC are recorded). However, rainfall is scarce, due to the western winds.

Valle d’Aosta cuisine boasts a long list of typical dishes such as the Valpellinese soup (black bread, cabbage and fontina cheese), rice-based Cogne soup, polenta with cheese tanning and carbonade (beef marinated in wine for 10 hours and cooked with smoked lard and various spices). The Fontina and Fromazdao cheeses are the most commonly used in cooking. We all know the famous Fonduta. Then we have the Lardo d’Arnard cold cuts and the delicious Jambon de Bosses (ham). The offer is completed with cakes and typical sweets such as Tegole with almond paste, Mont Blanc, Cogne cream and Valle d’Aosta coffee. There are also produced different wines such as the red Arnad-Montjovet Picotendro, Gamay, Gamay and the white wines Blanc de Morgex et de La Salle Prié blanc and Muscat Petit Grain Moscato bianco

Place and attractions to visit

Valle d’Aosta boasts attractions and itineraries for all tastes, but there are some must see.
The Gran Paradiso National Park allows you to admire multiple flower species and to meet the ibex;
the main city Aosta follows with remains of Roman origin, like the arch of Augustus and then we have itineraries along the Lillaz waterfalls. Finally, the Arpy Lake of glacial origin, the Rutor Waterfalls and the many medieval castles and fortresses scattered all over the territory, such as the Fénis Castle, Forte di Bard along the Via Francigena pilgrimage route and the Verrès Castle, dating back to the 14th century. Courmayeur and Cervina are among the most important ski resorts and as the most important nature parks we mention Gran Paradiso and Il Mont Avic.

Our Tours in Valle d’Aosta