Land of sea, hills, and plains, Apulia (Puglia) is a region of southern Italy that attracts visitors for many reasons: its splendid coasts, its art cities and picturesque historic villages where ancient religious traditions are still alive, its country farms surrounded by olive groves and its genuine products with an ancient and unparalleled flavor. Puglia borders Molise to the north-west, Campania, and Basilicata to the west, and is bathed by the Adriatic Sea to the east and north and by the Ionian Sea to the south. 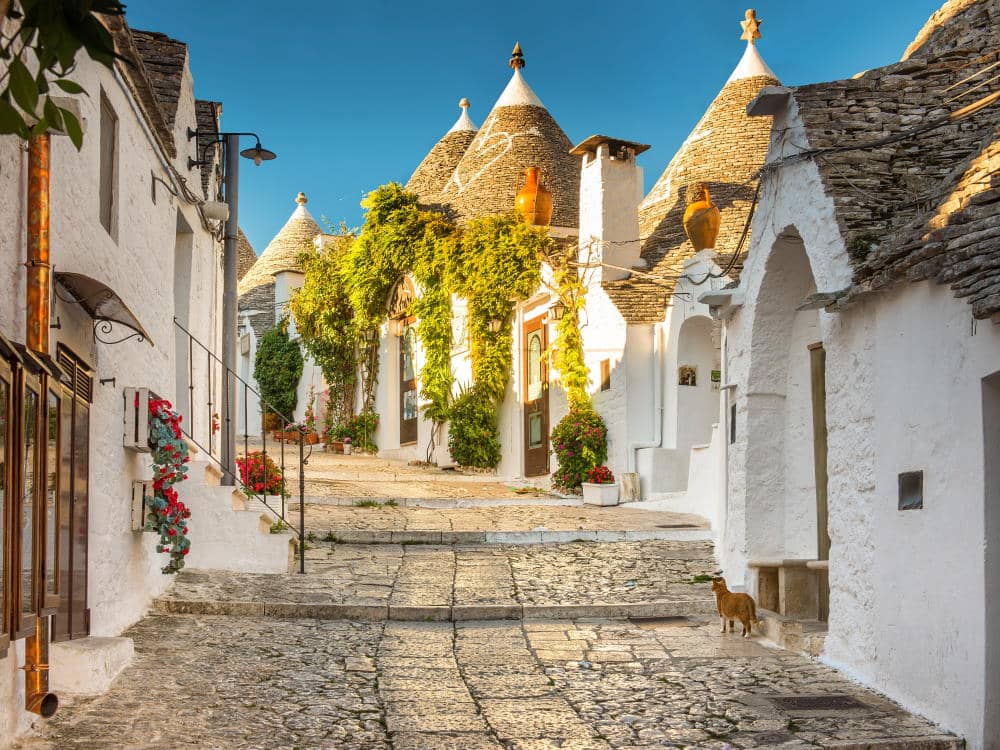 Archaeological findings testify that Salento was already populated since the Paleolithic era. In historical times, Apulia was inhabited by the Messapi, while Taranto was a city of Magna Grecia founded by the Spartans. Following the defeat of the Samnites, the region was conquered by the Romans in the third century BC. Much later, during the crusades, Apulia, thanks to the port of the city of Brindisi, became a strategic area: from here it was possible to embark to leave on a mission to free Jerusalem. The region was first Norman, then Angevin, and finally Aragonese. After that, before the unification of Italy, it passed from the Habsburgs to the Bourbons.

Its territory is almost entirely flat, except for the Gargano peninsula, the only mountainous area in this region of Southern Italy. Here the landscape is dominated by vineyards and olive groves. Those of Salento are particularly well known because their cultivation has changed the profile of the region.

From north to south, six geographical regions follow one another gradually, without sharp contrasts: the Gargano, the Dauno Sub-Apennines, the Tavoliere delle Puglie, the Murge, the Tarantino Ionic Arch and the Salento. With its 834 km of coastline, including the Tremiti islands, Puglia is the third Italian region for coastal length after Sicily and Sardinia. The coast of the Gargano is generally rocky but has numerous coves with sandy beaches.

Apulia boasts a wonderful Mediterranean climate which makes it an ideal holiday destination for most of the year. Spring comes early and is generally hot and sunny, with temperatures rising up to 20 ° C in April. Summer is long, hot and dry and lasts from late May to late September. Temperatures usually rise around 30-35 ° C in July and August. The sea warms up wonderfully making swimming and bathing very pleasant. Autumn arrives between October and November with climate remaining hot above 20 ° C, still good for bathing. The winter months can be a little rainy, but with an average temperature of about 10-15 ° C.

Among the strengths of the Apulia region there is certainly its traditional cuisine, aimed at enhancing local raw materials. The Apulian gastronomy is made up of dishes with simple flavors, such as the “sgagliozze” of Bari, medallions of fried polenta, excellent as street food and the Apulian focaccia, for a traditional snack. Then we have the delicious pasta dish ‘orecchiette’ with turnip greens, a truly unmissable first course. A very special places takes the fried lampascioni and octopus alla pignata, a very tasty second seafood course. The cocule, have as main ingredients tomato sauce and potatoes and the pettole are fried balls based on leavened dough. Those mentioned are, however, only some of the specialties that make up the Apulian cuisine. To enrich the table there are, in fact, many other delicacies: the wines Negroamaro e Primitivo, the cheeses Cacciocavallo Silano, burrata di Andria and Canestrato Pugliese, the excellent oliveoil, cold cuts like the capocollo e soppressata of Martina Franca and lardo di Faeto.

You have plenty of choices when you plan a trip to Apulia. In fact, the possibilities offered by this region are truly numerous. For architecture lovers, we recommended visiting the city of Lecce, a place where you can admire many Baroque wonders.

For Middle Ages lovers, a visit to Bari is something you cannot miss. The historic center of the Apulian capital, in fact, is dominated by the Norman-Hohenstaufen Castle and retains its medieval structure. A must-see in the city is both the cathedral of San Nicola and that of San Sabino, the fort of Sant’Antonio Abate, of the fourteenth century, the underground Bari (starting from the Castle). Near Bari we recommend a visit to Alberobello, the well-known town of the Trulli, and an excursion to the Castellana caves. For lovers of beach and sea, there is the beautiful province of Salento, which not only has fantastic beaches and a crystal clear sea, but also cute towns to visit. We only mention the white city of Ostuni and Gallipoli with its old center on a peninsula. Then for the nature lover there are the Regional Natural Parks del Gargano, of Porto Selvaggio and the Palude (marshes) del Capitano, Bosco e Paludi di Rauccio and Isola di S.Andrea e litorale Punta Pizzo.

Our Tours in Apulia

This cycle tour through Salento in Apulia, is a perfect combination of leisure cycling and exploring the flavours of local food & wine.

This cycle tour in Salento, the ‘heel of the boot’, is ideal for families, because the routes are short, almost flat and you do not change hotel every day.

Sassi & Trulli a tour in Basilicata and Apulia

A lovely week of cycling around the two wonderful UNESCO sites of Alberobello and Matera in the sunny region of Apulia.

The best of Salento

Crossing Salento by bike is like moving through an open-air museum: Prehistoric Dolmen, Byzantine shrines, lighthouses, and Baroque cathedrals.

An intriguing walking tour in Apulia, in the Heel of the Italian boot, starting in the baroque town of Lecce, a tour full of history, food & wine.