Basilicata with its capital Potenza, is one of the regions in Southern Italy that is least affected by tourism, yet it offers numerous ideas for a complete holiday, to discover an enigmatic and wild territory, in absolute peace. If you look for it, there is no shortage of nightlife: Maratea, Matera or the most famous places on the coast have places suitable for meeting the most diverse needs. However, not only it is also a place for those who like quietness, nature, culture, to walk and cycle… and how can we miss the excitement of staying, even just for a night, in the ancient caves of Matera? 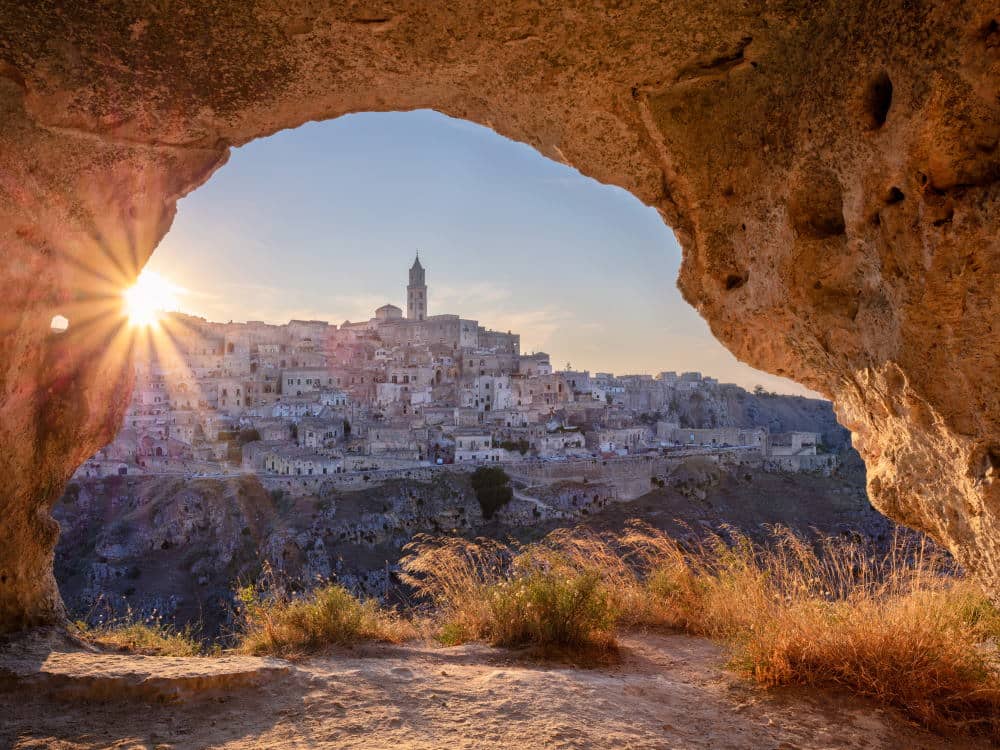 The history of Basilicata is very ancient: there are traces of Magna Graecia, the Middle Ages, the Normans and the Swabians in the various castles scattered throughout the territory. Greek colonists arrived on the Ionian coast between the 8th and 7th centuries. B.C. founding the cities of Eraclea, Metaponto and Siri; then the Lucanians and the Romans came. The Normans made Melfi their capital and it was in this period (11th century AD) that the name Basilicata, of Byzantine origin, appeared for the first time. The Lucanian people supported Garibaldi after the period of total abandonment under the Bourbons, but even after the annexation to the Kingdom of Italy the conditions did not improve, indeed poverty became even more dramatic, causing brigandage and emigration.

The geography of Basilicata can be summarized as follows: a furrow of four rivers, Agri, Sinni, Basento and Bràdano, which descends between the mountains, from the Apennine watershed to the flat northwestern shore of the Gulf of Taranto in the Ionian Sea and to the plain of Metaponto; it then extends to the other mountains until it reaches the Gulf of Policastro, on the Tyrrhenian side. For the rest it is hills and mountains, from Pollino and Sirino in the south to Vùlture in the north. To its harsh morphology, the etymology of the name lucus (Lucania) or wood must be added, to get a complete picture of the territory. The villages are perched on the heights because the populations have withdrawn from the coast and from the valley floor to live in the mountains.

Basilicata has a Mediterranean climate along the coasts and continental in the inland, so the climate is very variable depending on the location; then we must consider the fact that it is conditioned by three maritime sides: the Ionian, Tyrrhenian and the Adriatic one.

The circulation of winds and currents also depends on the numerous mountains which, by blocking the cloud formations coming from the Tyrrhenian Sea, contribute to make the Tyrrhenian part more rainy. The best time for a trip to Basilicata is from May to September because rainfall is scarce and the temperatures, even that of the sea, are perfect.

Basilicata is also a perfect destination for food and wine tourism as the presence of Greeks, Byzantines, Romans, Swabians, Saracens and Normans has left numerous traces in the cuisine, with a mix of unique and unrepeatable flavours. What unites all the most characteristic dishes, however, is the extreme simplicity, the legacy of a peasant and poor past. In Matera, for example, there is a typical dish, the crapiata, a legume and cereal soup. Among meat dishes, lamb dishes, cooked in various ways, and pignata, or sheep stew cooked in vegetables in a crock pot, are very popular. The dairy tradition is also very much felt and the typical cheeses are the canestrato of Moliterno, the casieddu of goat, the pecorino of Filiano and the pedraccio of the Pollino. Lucanica is the queen of sausages, especially in Picerno and Cancellara and then there is the famous Matera bread. Among the desserts you cannot miss the glazed taralli, the zest, walnut sweets and ricotta cakes. Aglianico del Vulture is the best known wine from Basilicata.

The best way to get to know Basilicata is traveling coast to coast, exactly like in the film with famous Italian actor Rocco Papaleo. You should start from Maratea and its territory, which represents the only area overlooking the Tyrrhenian Sea with internal areas with a very varied landscape dominated by the mountains, which changes suddenly showing woods, perched villages and jagged coasts. The town of Maratea is characterized by narrow and long, typically medieval alleys, overlooked by squares and churches. In the evening, then, it comes alive thanks to the presence of numerous clubs and restaurants. South of Maratea there are also many beaches, suitable for snorkeling. On the Ionian coast, from Metaponto to Nova Siri, a town on the border with Calabria, there are many testimonies of Magna Grecia, especially at the archaeological park of the Metaponto. After stopping in Pisticci and Scansano, we continue towards Policoro to visit the ancient Eraclea and also the Pantano Nature Reserve.

This wonderful region was recently rediscovered also thanks to Matera, declared European Capital of Culture 2019; this event shone the national and international spotlight on a region too long ignored. The Sassi di Matera are the ancient part of the city: they are caves, houses built by digging the rock. These structures are often connected by underground caves. The landscape created is very evocative also thanks to the integration between rock and architecture that has shaped a scenario of incomparable beauty. In the past, the Sassi di Matera were peasant dwellings, today they are considered an unparalleled tourist attraction.

Our Tours in Basilicata

Sassi & Trulli a tour in Basilicata and Apulia

A lovely week of cycling around the two wonderful UNESCO sites of Alberobello and Matera in the sunny region of Apulia.