Slovakia is a small but surprising country. It is situated in the heart of Europe and boasts the largest karst area in Central Europe with more than 6,200 caves and impressive deep caverns. Natural parks, an extraordinary green landscape, folk traditions (i.e. songs and dances in traditional costumes and arts and crafts) and several beautiful Unesco world heritage sites make it an interesting and pretty new tourist destination. 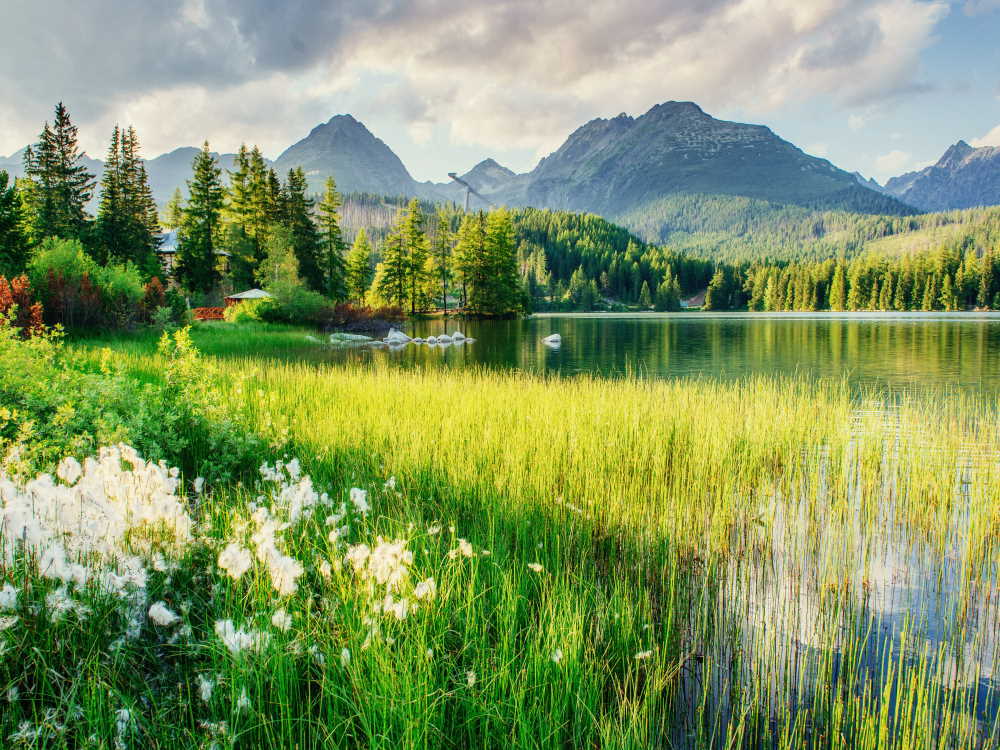 The territory of Slovakia has been inhabited since ancient times. The Celts settled here around the 4th century BC and remained there until the 1st century BC. Later it was invaded by Germanic tribes. Slavic tribes arrived here between the 5th and 7th centuries.
Subsequently, between 770 and 906, Slovakia became part of the empire of Great Moravia, together with Bohemia, Moravia, Pannonia, Silesia and Lusatia. During the second half of the 9th century, the brothers Cyril and Methodius spread the Byzantine Christian worship in the region. In the 11th century, Slovakia became part of the Hungarian kingdom and it remained linked to Hungarian events until the First World War. During the crisis phase of the Arpad Magyar dynasty (13th century), local lordships were formed, which did not, however, at least formally remove Slovakia from Hungarian control. In the 14th century, Bratislava was chosen as the administrative capital of what remained of the Hungarian kingdom. The arrival of precious metals from the new world also marked a period of crisis for Slovakia, due to the drastic reduction in the price of silver extracted from its mines.
After the Thirty Years War (1618-48) and the consequent mass migrations of Protestant families, in the seventeenth century the Slovak territory became a theatre of struggle between the Habsburgs and the Hungarian nobility. Eventually it passed permanently to the Habsburgs (Peace of Carlowitz, 1699). It was at the beginning of the nineteenth century that a first form of national consciousness began to develop in the country, more anti-Hungarian than anti-Hapsburg, though. This was why the Slovaks supported the Habsburgs in 1848 during the Hungarian national uprising. However, the creation of the dual Austro-Hungarian monarchy (1867), with the failure to recognize the Slovak identity (as well as the Czech one), marked the final break with the Habsburgs. Thus, a period of serious crisis for the country began: it experienced a very strong emigration, mainly towards the United States. At the same time, Slovak nationalism began to rise: the First World War gave this popular will a further impulse, leading to the creation of a new state, the republic of Czechoslovakia, recognized on 28 October 1918. In 1992, after a long period of discussions, the federal parliament decided to divide the country between the Czech Republic and Slovakia and Czechoslovakia thus ceased to exist. On 1st January 1993, the Republic of Slovakia was born, a parliamentary republic which today has approximately 5 million inhabitants.

The country borders on Poland to the north, Hungary to the south, Ukraine to the east, Austria to the south-west and the Czech Republic to the north-west.  Heavily forested mountains cover much of the northern regions (Carpathian Mountains) and central regions (Ore Mountains) and slope downwards to the lowlands of the Danube river in the west and the Hornad river in the east.  There are several pristine lakes, particularly in the Tatra Mountains in the north (here we can find the highest point of the country, Gerlach Peak, 2,665m). Slovakia is also the only European country outside of Scandinavia where you can find a natural geyser, the geyser of Herľany.

The country has a typical European continental climate with warm, dry summers and cold winters.  Autumn and winter stretch from around September to May: January is the coldest month; spring and summer go from May to August with and July is the warmest month. In spring, temperatures reach the low teens and the days can be windy.  In summer, daytime temperatures reach 20-25°C in the mountainous regions, but it can be quite hot in the lowlands, reaching 30-35°C.  Autumn can either be very foggy and wet or can experience beautiful clear sunny days.

Slovak food and recipes are really only available in Slovakia itself, so we can say that its cuisine is unique. Slovak cuisine was greatly influenced by its two neighbouring countries – Hungary and Austria. Slovak dishes include pork, poultry, cabbage, wheat and potato flour, cow and sheep cheese, potatoes, onions and garlic. Rice is widely used both in houses and restaurants.
Beans, corn on the cob, lentils, parsley, carrots, and other vegetables are often used to create soup dishes and other dishes in all Slovakia.  Fruit like apples, plums, apricots, peaches, plums, and cherries are offered as a side dish alongside the main meal in Slovakia.
Pork, beef and chicken are the three most popular meats used in Slovakian food. Among the most typical dishes: Bryndzové halušky, which is considered a national dish. It is made of potato dumplings, sheep cheese called “bryndza”, sour cream, and bacon. Then the Kapustnica, a cabbage soup with mushrooms, sausage, and a lot of red paprika, served with bread and vepřo knedlo zelo, that is Pork with dumplings and cabbage. Finally, the Lokša, a pancake made out of flour and potatoes. There are two typical ways to eat it – sweet and salty. But these are just a few dishes: you really have to go there to experience all their food and wine specialties!

Slovakia is a land with magnificent cities, majestic castles and above all a fabulous natural landscape. In spite of that, many people might struggle to place it on a map. Often overlooked by tourists, this modest-sized destination is rich in architectural grandeur and boasts a mountain region to rival the Alps. In fact, one of Slovakia’s main tourist attractions are the Tatra Mountains, the highest part of the Carpathians. They feature many rare plant and animal species and offer numerous skiing, hiking, and mountaineering opportunities. Rivers and streams in the mountains of Slovakia are often used for rafting and other white-water-based activities and sports. Slovakia also boasts numerous mineral springs and spas.
Among the cities, Bratislava is surely a must: A younger sister to Vienna and Prague, Bratislava shares part of its history with Budapest due to its time under the rule of the Hungarian kingdom.
The city became Slovakia’s capital in 1993 and is now one of the most interesting border cities in Europe. You can visit the magnificent Bratislava Castle and explore the old town with its historic houses: you won’t be disappointed. In Bratislava there are loads of fantastic bars and restaurants, with more upmarket boutiques and trendy cafes springing up every year: Bratislava never gets old, always beautiful with the river Danube flowing through it. But if you should ever feel the need for a change of scenery even on a day trip, then both Vienna and Budapest lie nearby.
Košice is the second biggest town in Slovakia, it boasts a UNESCO-protected site, St. Elisabeth Cathedral with its amazing architecture. While visiting it, you can enjoy the coziness of the coffee shops on main Hlavná Street and the grandeur of its Neo-Baroque State Theatre. Bojnice is definitely worth a visit too: it is one of the oldest spa towns in Slovakia, famous for its magnificent fortress. With its beautiful mix of Romantic, Gothic, and Renaissance architecture, its picturesque towers, and a swan pond, Bojnice Castle could be a perfect place for a fairytale!
Slovakia is absolutely worth a trip for its beautiful cities, amazing nature, and strong folk traditions. 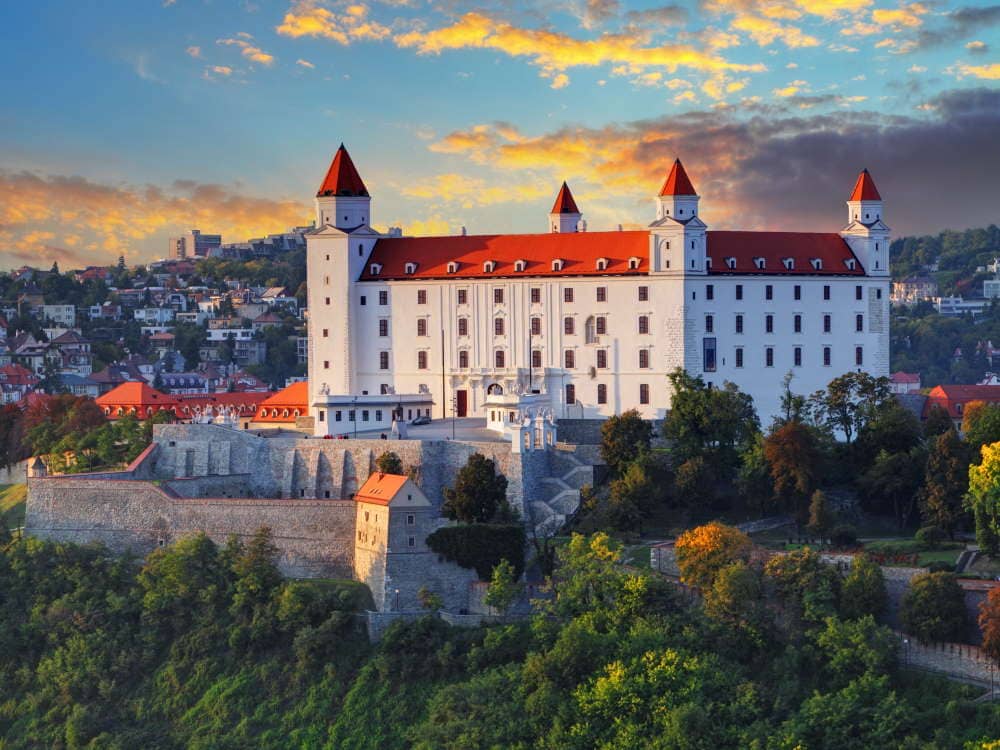 Our Tours in Slovakia

The bike path along the Danube: Vienna-Bratislava-Budapest

The Danube bicycle path is one of the most popular destinations for cycle lovers, but it does not end in Vienna! This tour crosses three countries: Austria, Slovakia, and Hungary.