Molise is a small region of Southern Italy which borders on Abruzzo, Lazio, Campania and Puglia; to the east it is washed by the Adriatic Sea. On its stretch of coast, Molise houses three marine areas, Termoli, Campomarino and Petacciato and holiday and seaside resorts of considerable importance. 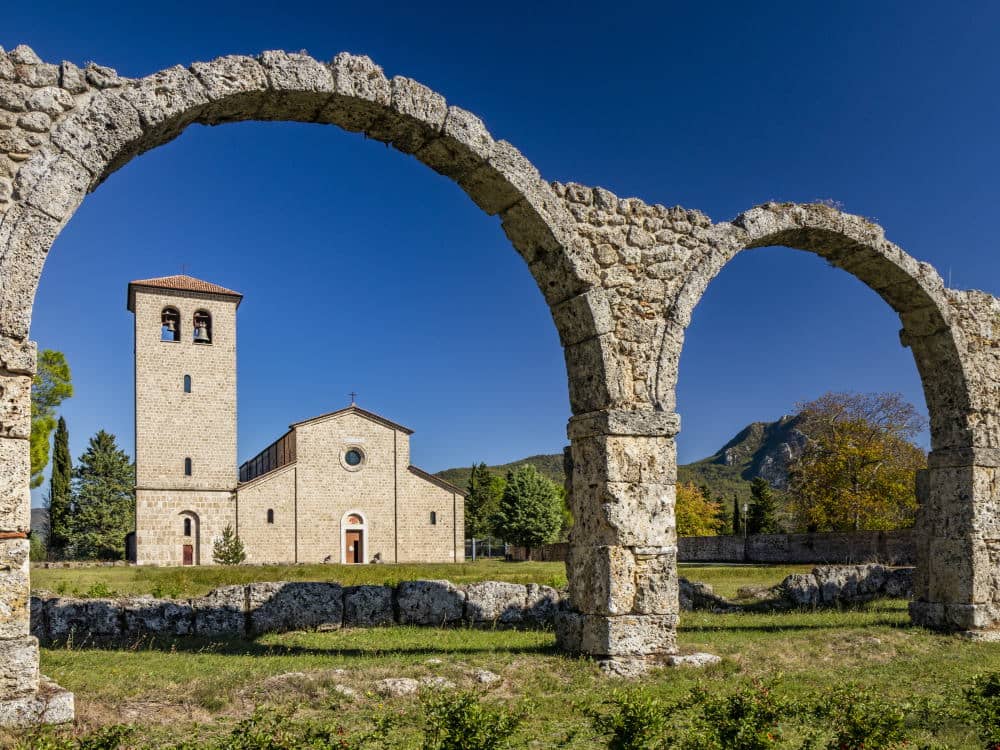 The Molise region is historically identified with the ancient Sannio. For a long time, during the Roman period, it shared its history with Abruzzo. After the Roman domination, Molise was invaded first by the Goths and then by the Lombards. The 10th century saw several feudal lordships that had become autonomous. Among the dates that have marked the history of Molise it is of fundamental importance to remember 1221, when Emperor Frederick II of Swabia transformed the region into a district of justice of his empire. In the fifteenth century this region saw a massive immigration of Albanians, Schiavoni and Gypsies. These peoples settled in the territorial area of Foggia, where they founded several centres. In the 16th century Molise was merged with the Capitanata from which it detached itself with the French occupation of 1806. Five years later, thanks to Gioacchino Murat, Molise became an independent province. In the years between 1861 and ’65 Molise was one of the most fervent centres of gravity of brigandage, an expression of discontent among the working classes of Southern Italy. Molise became an autonomous Region in 1963.

Half of the territory is occupied by mountains, most of which belong to the Apennines. The main mountains are Monte Meta, Matese and the Marsicani Mountains, which also mark the borders with other neighbouring regions. Such a lively landscape can only reserve large spaces for lakes, rivers and several smaller waterways that, over time, have designed the orography of Molise. There is also the sea, with 35 kilometers of coast between Termoli, Campomarino and Petacciato which offers opportunities for relaxing holidays in pleasant places that have got the Blue Flag for the quality of services and waters. The Molise coast is sandy and mainly low and rises only at the Termoli promontory. The landscape is dotted by coastal dunes formed from the stagnation of torrential waters, a natural consequence of marshes that were then reclaimed.

Mostly mountainous and hilly, Molise enjoys a continental climate where the winter seasons are mostly cold and snowy while the summer ones are muggy and particularly hot. The climate is more pleasant on the coast, often kissed by very pleasant summer breezes.

Molise is a place of silence and enchanting natural landscapes, with villages where time seems to stand still and offers visitors great gastronomy of ancient tradition. Four Molise locations are listed among the most beautiful villages in Italy: Sepino, Fornelli, Frosolone, and Oratino. The latter is famous for its artistic and artisan works as well as for its laganelle and for the beans with eggs and cheese cooked in a sausage sauce. In Frosolone the kings of the table are the sannias and the beans cooked in the pignata, while in Fornelli, a town known for its olive groves, the main dish is the tacchunell and fasciuel, a particular homemade pasta cooked with beans in a sauce of garlic and oil. Finally, in Arpino, the main dish is polenta stewed with ragù. Other typical products are Agnone’s cacciocavallo, capofreddo, zitella apple (Limoncella molisana) and other delicacies such as crioli with cod and walnuts.

Molise is a territory that is unknown in many ways to mass tourism. Yet this region is in the heart of Italy, rich in mountains, hills, and landscapes and enchants the visitor with its unspoiled beauty.

A must-see is Campobasso, the Molise capital where the famous Norman Castel Monforte is located, which dominates the entire historic centre. Also Bojano, the former capital of a Samnite tribe.

In the historic center of Bojano, in addition, there are seven churches of high artistic value, and every second Sunday in May the town comes alive for the ancient Ver Sacrum, a religious event of Samnite origin that was organized to ask for good fate in battle.

Larino with its Roman amphitheater is worth a visit, as well as Termoli with its ancient village overlooking the sea and its enviable position: it is a perfect starting port to visit the Tremiti Islands.

It certainly cannot be said that Molise lacks singular and unique museums in the world. Among these, the one dedicated to the bagpipes of Scapoli, located in the rooms of Palazzo Mancini, in the highest part of the town. It is from this village that all the bagpipers who brought the notes of Christmas music have started. Finally, Isernia deserves a visit: despite being the smallest province of Italy, it is home to the largest and most ancient prehistoric field in Europe dating back to around 736,000 years ago. Since its discovery in 1978, it has been the most important point of reference for the study of prehistory; the archaeological area can be visited along an elevated walkway in order to observe the paleo-soil, where there are many finds and fossils.

Our Tours in Molise